Please note: The words glyphosate and GMO’s are used interchangeably throughout this article.

Glyphosate (Roundup) is the most popular pesticide used worldwide. It has a broad spectrum of uses, but its most popular use is in crops in the form of Genetically Modified Organisms (GMO’s).

GMO’s are living organisms that are developed from DNA from a plant and artificially manipulated in a laboratory through genetic engineering.

This dividing of DNA to a new crop results in a new crop that would not exist naturally and is intended to supply the same desirable traits (1).

The role of GMO’s is to help crops become resistant to herbicides.

New technologies are also being used to help with other areas such as the resistance of browning in crops (such as in apples), and creating completely new organisms with artificial biology (1).

You may have heard that GMO’s are beneficial since they can helpincrease crop yield. The problem is, research is finding that they can do more harm than good (2). How Glyphosate May Impact Health

There has been a lot of debate about the safety of glyphosate since its introduction in 1974 (3,4).

A big concern is the association with glyphosate exposure and the frequency of cancer.

A study from the International Journal of Clinical Medicine concluded that high glyphosate pollution is associated with increased frequencies of cancer, and in March 2015, the World Health Organization determined that glyphosate is “probably carcinogenic to humans” (5,6,7).

In fact, there have been three lawsuits just this year awarded against Monsanto, the company that created glyphosate claiming that glyphosate causes cancer.

One of those lawsuits was from a California man named John Barton who was diagnosed with non-Hodgkin lymphoma in 2015, and claimed that using glyphosate for decades was the cause of his cancer.

In addition to those lawsuits, there are 11,000 current pending complaints against Monsanto (7).

Whichever side you agree with, know that there is a lack of independent long-term studies showing the long-term safety of GMO’s on our health.

Should You Avoid Glyphosate?

In my opinion, GMO’s should be avoided.

In fact, other countries such as France and Germany are currently banning the use of GMO’s on their crops (8).

In addition, supporting GMO-containing foods may decrease business for organic farmers, who provide not only nutritious food but may also support the environment and improve soil and water quality (9).

As with any area of health, it’s important to be your own advocate and and know exactly where your food is coming from.

How To Avoid Glyphosate

There’s a variety of ways to avoid GMO’s.

One way is to buy products with the Non-GMO Project Verified or Non-GMO Certified logo on the package.

Another way to avoid GMO’s is to choose organic for produce.Organic produce means there has not been any GMO’s used in the development of that crop.

If you’re unable to buy organic for all your produce, focus on choosing organic for the most popular GMO-containing crops such as

Another way to avoid GMO’s is to look at the source of your meat and dairy products. Many animals are fed GMO-containing feed, so learning what animals are eating can also be helpful (10).

GMO’s have been around since the 1970’s, and there is still a lot of controversy regarding their health impact.

As a dietitian, I recommend to be your own advocate and learn where your food products are coming from, what the animals you consume are eating, and choose food companies that value your health. Autumn Enloe, MS, RD, LD, CLT
Autumn Enloe is a registered dietitian in Minnesota. She has a private practice where she focuses on helping women take care of themselves through proper nutrition, supplement and lifestyle adjustments. She provides remote nutrition coaching and frequently posts free nutrition content and recipes at her website: www.autumnenloe.com. In her free time she enjoys chasing around her toddler, laughing with her husband, creating recipes in the kitchen, and practicing yoga. 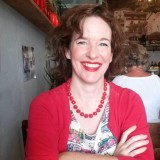 Just a quick note that buying things with the “Non-GMO Project” seal is NOT enough. All that guarantees is that the crop itself wasn’t genetically modified. It does NOT guarantee it wasn’t sprayed with RoundUp or another pesticide. There are documentaries and in-depth articles verifying this. If you want to avoid pesticides, you have to make sure the food is also labeled USDA/Organic. And even then, you need to wash off your produce or soak it in baking soda water prior to eating, because it has been shown that even organic crops can be tainted by “overspray” from adjoining farms. Whole Foods got into trouble when their organic produce was tested and found to have trace amounts of Glyphosate. They claim this is the customer’s fault for mixing organic and conventional produce in their shopping bags and having the pesticides rub off (they even have signs up in stores telling customers to keep organic and conventional produce in separate bags!).